It doesn’t get any more behind the scenes than this: one incredibly lucky auction bidder and a guest will live the life of backstage tour producers for the legendary band U2 during one of three North American show dates for their 360° Tour.

In this experience you and your guest will shadow U2’s tour producer for a day that will allow you to:

Tour stops that are available to choose from are:

Long-time U2 Show Director Willie Williams has worked again with architect Mark Fisher (ZooTV, PopMart, Elevation and Vertigo), to create an innovative 360° design which affords an unobstructed view for the audience. U2 360° also marks the first time a band has toured in stadiums with such a unique and original structure.

Proceeds from this auction will go to LIFEbeat, an organization that is dedicated to reaching America’s youth with the message of HIV/AIDS prevention. LIFEbeat mobilizes the talents and resources of the music industry to raise awareness and to provide support to the AIDS community.

The auction runs until June 17 and can be accessed here. 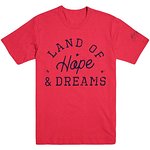