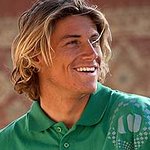 British Surfing champion Alan Stokes is the latest ambassador for the Make-A-Wish Foundation.

Alan Stokes discovered surfing at the young age of 6, following his family re-locating to Newquay, Cornwall. Since his first surfing lesson, Alan was ‘hooked’ and he began competing at aged 13. Alan left school at 16 years old and became a Professional Surfer. He then competed on the Pro Junior European Tour in 2001, where he finished 2nd. Following this success, Stokes went on to model for surf clothing brand Animal and has since then gone on to model for Vans, as well as to represent Britain and England in many Pro surfing Tours.

Alan Stokes is the latest celebrity to help some special children experience the magic of a Make-a-Wish wish, and he took some time of his latest competition to meet with three of the Make a Wish children. Four year old Kai, who is living with Pulmonary Artesia, recently had a Mickey Mouse Play House bedroom makeover and Jonathan (aged 11), who is fighting Duchenne Muscular Dystrophy, had a special day out when he met the Storm Troopers from his favorite film, Star Wars. Five year old Reef, who has Rhabdomyosarcoma – a type of cancer – will be swimming with dolphins in November for his wish.

The boys met Alan ahead of the Boardmasters’ five star world qualifying series surfing event. He took them to the beach where he himself learnt to surf – Tolcarne Beach in Newquay – and where the tournament is taking place. He also showed the children and their families some basic surf moves.

Jonathan said: “I have had the best day! My favorite part was learning to surf – I’ve never been surfing before.”

Alan said: “It’s fantastic to be an Ambassador for such a wonderful charity. I feel honored to have met such wonderful children today and I look forward to meeting more children and raising the profile of Make-A-Wish in the South West.”

In his role as Ambassador, Alan will meet more wish children, help Make-A-Wish with fundraising, and attend Make-A-Wish events and balls.