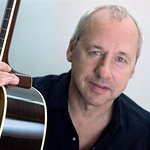 Guitarist Mark Knopfler has just released his latest solo album – Get Lucky – and to celebrate he has donated a guitar to benefit Chichester’s Pallant House Gallery in the UK.

The former Dire Straits frontman was at the modern art gallery in West Sussex on Saturday, September 12, to play a private fund-raising preview gig for his new album, and has donated his guitar to help fund the facility. The guitar is brand new, was set up for Mark by his guitar tech, Glenn Saggers, and was used throughout the concert.

“Knopfler was joined by Guy Fletcher, Luke Brighty and John McCusker at the charity event which was held in aid of the award-winning gallery’s appeal fund,” said Pallant House spokeswoman Emma Robertson. "Home to one of the best collections of modern British art in the country, the appeal works to secure the future of the gallery in perpetuity.

“Bids opened on Sunday at £1,500 and had already reached £2,200 by the second day. All of the proceeds from the auction will add to the money raised by the charity concert.

“The exclusive event attracted a number of high-profile guests including representatives of rock, art and motor sport royalty, including Damon Hill and the grandfather of British pop art, Sir Peter Blake. The international tour of Get Lucky kicks off at the end of September."

Knopfler’s signature Strats are all made in the USA to Mark’s personal specification, it goes without saying that these instruments are all beautifully made but this particular instrument was hand chosen and played by Mark for the event.

The auction runs until September 20, and can be accessed here. Photos of the concert can be viewed by clicking here.

Get Your Hands On Guitar String Bracelets From Music Industry Legends To Help Lupus Research Mar 11, 2016

Guitarists are donating used strings from their guitars which will then be made into very cool bracelets and auctioned off to raise funds for the St. Thomas’ Lupus Trust. More →