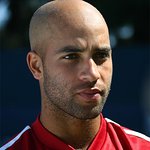 Tennis player James Blake has announced that he will host a tennis exhibition match with Grand Slam champion Andy Roddick to raise for cancer research at Memorial Sloan-Kettering Cancer Center in December.

All of the proceeds will benefit the Thomas Blake Sr. Memorial Research Fund, a charity named in memory of James Blake’s father, who died of cancer in 2004. Blake has raised more than $1.5 million for charity, and earlier this year was awarded a major humanitarian award for his charity work.

The event will also include an after party with entertainment, food and fashion show.