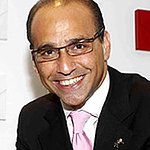 The New Children’s Hospital Appeal hit its target of £20m at a star-studded event (Thursday 22nd October) thanks to a “money can’t buy” auction.

Fundraising efforts ran right up to the last minute, with TV Dragon Theo Paphitis donating an extra prize of a half day’s business consultancy that raised £20,000. He’ll be working with two local businesses, who each paid £10,000 for his services.

Other prizes up for grabs included the chance to commission a portrait by renowned artist Darren Baker. Darren has recently painted members of the royal family, and his portraits of sporting heroes are well-known. That auction lot raised £15,000.

Bidding was moved swiftly along by TV auctioneer Adam Partridge, star of the BBC’s ‘Flog it!’ and Bargain Hunt.

Other auction lots included a meet and greet with X-Factor finalists when they perform in Manchester next year, a champagne weekend at The Goring, London’s last family-owned five-star hotel and a luxury shopping extravaganza at Harrod’s.

Appeal Chairman Maurice Watkins announced that the Appeal had hit its £20m target just after midnight, following a performance by chart-toppers JLS and ’Britain’s Got Talent’ finalists Stavros Flatley.

Maurice Watkins said, “We had a fantastic evening and it was extremely successful, but we mustn’t forget that it was the culmination of more than three years’ hard work by thousands of people. Everyone who has supported us during the Appeal has contributed to reaching this momentous milestone and we are extremely grateful. It will make a real difference to the standard of healthcare and support we can provide to the children of Manchester and the North West. I hope everyone will share our pride in this achievement.”

Manchester City manager Mark Hughes attended along with chief executive officer Garry Cook and legend Mike Summerbee, following the club’s donation of £500,000. Gordon Taylor of the Professional Footballers’ Association was also there, as was Sir Howard Bernstein, chief executive of Manchester City Council, both of whom have been keen supporters of The New Children’s Hospital Appeal.

Funds raised by the Appeal are being used to provide facilities in addition to the medical care provided by the NHS. Resources include things like pull-down beds on each ward so that parents can stay close to their children while they are in hospital and specialist equipment which improves the diagnosis and treatment of the young patients.

more information about the Appeal can be found here.