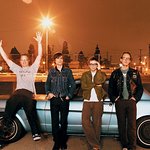 The series features exclusive downloads of new and rare music from Weezer, Ween, The Donnas, Cowboy Junkies, Dean & Britta, Buffalo Tom, Linda Thompson, Drug Rug and others, with more artists to be added in the coming months. In addition to these exclusive pay-what-you-wish downloads ($.99 minimum), The Right Track will sponsor a series of concerts and events, with 100% of proceeds from all its initiatives going directly to research funding.

“We jumped at the chance to give an exclusive track for TargetCancer Charity,” said Weezer. “We feel this is an extremely worthy and urgent cause and are all too happy to help out.”

“Like so many others we have had friends and loved ones deeply affected by cancer,” added Dean & Gene Ween. “We believe everyone should stand together in the hopes that we someday might find a cure.”

“We are happy to be able to support TargetCancer, especially its goal to find better treatments for rare cancers,” agreed The Donnas. “Contributing one of our unreleased songs is a good way for us to combine raising awareness about a cause that matters to us, and sharing new music with our fans and new people too.”

TargetCancer was founded by Paul Poth, a Boston-based attorney and devout music fan. From classical to punk, jazz to rock, Paul listened to it all. An accomplished cook, he might begin an evening playing Tchaikovsky or Chet Baker during dinner, and move on to Husker Du, The Feelies, and The Figgs by dessert.

In 2007, at age 38, Paul was diagnosed with hepatobiliary duct cancer, an extremely rare form of cancer – so rare, in fact, that no treatment protocol existed for it. Instead, Paul’s doctors had to determine a course of treatment based on other cancers. It was this fact that drove Paul to create TargetCancer. After fighting for close to two years, Paul passed away in August 2009, but his fight, and his passion, lives on through TargetCancer and The Right Track series.

“Not one of us will escape being touched by cancer in some way,” says TargetCancer’s Director and President, Kristen Palma, who was married to Poth. “We are so grateful to all of these amazing artists for understanding this, for sharing their talents, and for joining with TargetCancer as we work towards finding a cure.”

Songs can be downloaded here, and more info can be found at the TagetCancer website.