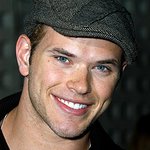 “It’s our job to take [animals] under our wing and take care of them and give them a place to live,” Kellan explains, referencing the more than 7 million dogs and cats that are left at animal shelters in the U.S., many of whom are euthanized for lack of finding a good home.

“I went to numerous animal shelters and I saw this dog in the corner, she was in a cage with a bigger dog, she was scared…you can feel the pain that they go through,” Kellan says of adopting Kola, “I just looked in her eyes and knew she was just for me.”

Animals sold in pet shops often come from “puppy mills,” where they are housed in cramped, filthy, unhealthy conditions and lack proper veterinary care. And each time someone purchases a dog or cat from a pet store or breeder, one fewer home is available for an animal desperately waiting in an animal shelter or roaming the streets.

Fans can check out Kellan’s exclusive interview for PETA, and watch him share his thoughts about meeting Kola for the first time. Plus, listen as he gives Twilighters a special message letting them know what they can do to help animals! Also, fans who visit Kellan’s PETA page have a chance to win one of two Twilight DVDs signed by Kellan himself! All winners will be chosen at random and notified by April 16.