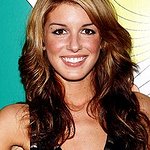 Shenae Grimes hosted an exciting event for the St. Jude Children's Research Hospital on Wednesday, celebrating art, friends, family and, above all, charity.

Held at the Avalon Beverly Hills, the event showcased over 20 photographs taken by Shenae Grimes of her dear friend, Laura Worthington who has been bravely battling her Hodgkins Lymphoma. Aiming to raise awareness and money for those affected by Hodgkin’s Lymphoma, proceeds from the sales of the photos helped raise thousands of dollars for St. Jude Children’s Research Hospital.

‘90210’ castmates came and showed their support of the cause, bidding on photos, mingling with guests and admiring the photographs. A sharp looking Kevin Connolly arrived with a pal and relaxed poolside in a cabana after greeting Shenae and Laura and bidding on photos as well. Towards the end of the night Shenae gave a very organic and moving speech, thanking guests and sponsors, and above all her good friend and muse, Laura Worthington.

Shenae Grimes has a mission for you!