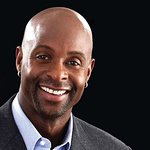 The charity event festivities kicked off the weekend with a celebrity poker tournament hosted by poker star Phil Hellmuth and Jerry Rice.

And while both Hellmuth and Rice were gracious in their duties as hosts, there were a slew of NFL greats taking part in this charity event. And one athlete in particular caught my eye: NFL legend and two-time Super-Bowl champion Darryl Pollard.

Pollard played seven seasons in the NFL, two seasons with Tampa and earning both his Super Bowl rings with the 1988 & 1989 San Francisco 49ers. Yet, despite his career fame, Pollard lacks a sense of entitlement generally seen in professional athletes and credits this to his upbringing. “It all starts at home,” he told us.

Look to the Stars was fortunate to meet this remarkable athlete and took a few minutes to pick his brain about his rare sincerity.

Yes, but the most important thing is to know what you’re doing and why you are doing it –because at the end of the day, it’s what you were before (your professional career) and what you are after that’s important. To truly carry on a legacy you must help make a difference- not just collect trophies.

What advice would you give younger players entering the league?

The hardest part of all, you can get caught in whirlwind, a world that’s not real. When it all calms down, and the lights dim down, that sense of reality will not be there anymore. The attention may not be there one day, so if you have a cause that was near to you before, always keep it real. If you’re an advocate for something you really believe in, people need to hear about it all the time.

Last and most importantly-keep it real and keep it professional. At the end of your career all you have is your achievements, your name and the professionalism on how you got things done. I have known a lot of organizations that have failed because they were being ran by family members and associates who did not understand non profit or how a non profit should be ran.

Which organizations do you feel are making a difference in the world?

Image of Change is doing amazing work and I am proud to be a part of their organization. Athletes thinking about starting a foundation or want help to get their foundation right, should work with them. Top notch! One of the programs we support together is Youth Speaks. It’s about giving kids a podium to speak what’s on their mind and a sense of self esteem unlike anything I have seen before. They have thousands of kids across the country benefiting from their programs. These are a couple who are making it happen and are doing it for the right reasons.