Formula 1 mastermind Ross Brawn has joined forces with the Royal National Lifeboat Institution (RNLI) to raise £350,000 for a new lifeboat on the River Thames.

Earlier this week, Ross launched the initiative called The Brawn Lifeboat Challenge, in which teams from some of the UK’s leading businesses will be pitting their entrepreneurial wits against each other in a unique fundraising battle.

The 11 teams taking part in the Challenge will compete to raise as much money as possible in just eight months. Teams will pitch their strategies to Ross, who is considered to be one of the most inspirational leaders in the UK, and benefit from his advice and extensive experience of working with highly successful teams.

The teams are briefed to turn £1,000 into a profit for the RNLI using their own ingenuity, determination, creativity, teamwork and strategic planning to reach their fundraising targets over the course of the Challenge, which runs until 31 December 2010. The money raised will fund a new lifeboat on the River Thames.

Ross, winner of the Formula 1 Constructors and Drivers championships 2009 and now Team Principal of the MERCEDES GP PETRONAS Formula 1 Team, says: ‘This is a ground-breaking challenge which pits some of the UK’s top companies against each other to raise funds for a new lifeboat. The lifeboat will be shared between Tower and Chiswick RNLI lifeboat stations and will save many lives for years to come.

‘Innovation is pivotal in Formula 1 and that’s what appealed to me about this challenge, which combines many of my passions: competition, the desire to be the best and, of course, engineering innovation. But more than that, it’s about people and working together to bring the best out in one another, supporting each other through the highs and the lows.

’Throughout the Challenge team members will learn new skills that they will not only take back with them to the workplace, but they can also continue to draw upon for the rest of their professional careers.

‘I am delighted to be part of such an inspiring challenge and am looking forward to seeing what innovative ideas the teams generate to raise vital funds for the RNLI.’

RNLI Chief Executive Paul Boissier says: ‘This is a tremendously exciting initiative for everyone at the RNLI. It will tap into the very best of Britain’s business talent and we’re thrilled to have such a motivational leader as Ross on board, who has generously donated his time to support this fundraising venture for a new RNLI lifeboat for the people of London.

‘We don’t seek or receive any Government funding, so activities such as The Brawn Lifeboat Challenge are vital for us in raising money to continue our lifesaving service.’

The winning team will win VIP tickets to a European Grand Prix and Ross will also attend a celebratory lunch at the winning team’s offices. 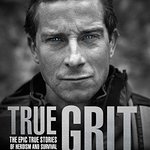 Bear Grylls' new book, True Grit, is more than just another book about heroism and survival. It is a series of tales of how the ordinary had to step up to become extraordinary, and more importantly, how we can learn from their lessons in everyday life. More →