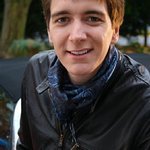 On the day that the final installment of the blockbuster Harry Potter franchise is released on Blu-ray and DVD, the Royal National Lifeboat Institution (RNLI) is launching a competition to win a jacket worn by Oliver Phelps, the film’s George Weasley.

Oliver undertook the Three Peaks Challenge in aid of the RNLI, scaling the highest mountains in Scotland, England and Wales in June. Now fans of the actor can enter a competition to win the Helly Hansen jacket that he wore taking part in the challenge.

The Barrier Jacket includes commemorative branding which makes it a great piece of memorabilia for fans of Oliver and the Harry Potter films to get their hands on. Entry to the competition costs £3, which will go towards Oliver’s target of raising £1,996 to pay for two RNLI lifeguards to be fully trained and equipped to patrol Fistral beach in Cornwall next season.

RNLI lifeguards provide a seasonal service on 163 UK and Channel Island beaches and in 2010, RNLI lifeguards aided 18,779 people and saved 107 lives. Helly Hansen is an official supplier to the RNLI and provided the technical clothing Oliver needed to complete the challenge.

Entry to the competition is by visiting the RNLI website and completing the following sentence: ‘The RNLI is a unique charity because …’.