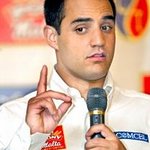 Six of the largest non-profit organizations in Colombia joined efforts at Karu & Y Restaurant in Miami on November 15 for BeLive 2007, a gala to raise awareness of the problems plaguing the South American country. NASCAR driver Juan Pablo Montoya, his wife Connie, and the charity they founded, the Formula Smiles Foundation, hosted the gala.

The red carpet was rolled out for guests as they arrived for dinner, a silent auction, a fashion show by designer Silvia Tcherassi, and an unplugged concert from twelve-time Latin Grammy winner Juanes.

The silent auction offered up such items as a race helmet signed by Montoya, a guitar from Juanes, an autographed art palette from renowned artist Fernando Botero, a painting by Colombian artist Jorge Cavelier, a haute-couture outfit from Tcherassi, several vacation packages and a cooking experience with acclaimed Colombian chef Harry Sasson.

Montoya, who credits his wife for planning the gala, said they use their Formula Smiles Foundation to build playgrounds in Colombia to encourage sports participation in a country that does not have physical education programs. The foundation also hires instructors, provides equipment and athletic gear, and encourages children to attend school.

Among the VIP guests was one of People Magazine’s Hottest Bachelors of 2006,
PGA golfer Camilo Villegas. Born in Medellin, Colombia, Villegas is a well-known supporter of Montoya’s Formula Smiles Foundation, and in 2006 Villegas launched his own foundation, Fundacion Escuela Circo Momo, which offers arts and education to the poor. He, along with others, were able to raise thousands of dollars to aid children and low-income communities in Colombia in the areas of health, education, nutrition and social development.

The six non-profits involved in BeLive 2007 included Give to Colombia, Colombianitos, Fundación Mi Sangre, United for Colombia, the Genesis Foundation, and the Formula Smiles Foundation.