Stars from UK soaps Coronation Street and Emmerdale came out to help the Blossom Appeal celebrate its 10th Anniversary at a glittering Gala Dinner event held at the Midland Hotel in Manchester on Saturday 2nd October.

Chairwoman Iris David commented: “Saturday’s 10th Anniversary Gala Dinner was a fantastic success. We raised in the region of £18,000 and this will really help towards our target of £250,000 to help fund a larger integrated breast care unit at North Manchester General Hospital. We are grateful to all the celebrities who turned out to support us, and for their help at this event.”

The Blossom Appeal is an independent charity which raises money for the breast cancer care unit at North Manchester General Hospital. Since it began in 2000, the charity has raised over £200,000 for the breast care unit, helping to fund vital equipment such as an Oesophageal Doppler (which reduces the operating time for patients undergoing more complex reconstructive surgery), a Ventana Benchmark (which can identify a cancer in a matter of hours) and an ultrasound scanner. 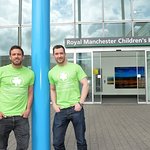 Manchester based actors Jamie Lomas and Anthony Quinlan are facing their fears by taking on a 240ft abseil in support of Royal Manchester Children’s Hospital Charity. More →