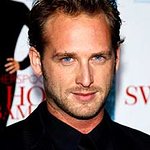 Actor Josh Lucas was out and about in New York yesterday with his dog, Loki, to help promote Purina’s new pet food and to give away $1 million to charity.

Lucas and Loki spearheaded the campaign, which saw the pair approach random people on the street and give them $5000 each to donate to the charity of their choice.

“I am totally convinced that all rescue dogs know they have been given a second chance and they seem to have something magical about them,” he said at a press conference. “They know they’ve been given a gift and they are blessed, and they seem to connect in a deeper way with their human. That’s been my experience. And at the same time, they end up being as big a gift to those who save them, so that it seems to be this perfect circle. Every rescue I’ve had and know seems more connected, and brings more joy, than I can adequately explain. It feels mystical.”

He also shared a story about another rescue dog in his life: "My mother now has the dog I rescued while working on Sweet Home Alabama. Amazingly, this was during the scene in the movie in the Coon Dog Cemetery (a real thing in the South) where Reese Witherspoon and I discuss our characters’ old dog “Bear.” While filming the scene, a crew member found, hiding under a coon dog gravestone, a very sick Lab mix and her 9 emaciated and equally sick puppies. The entire crew rallied around the dogs, paid for their vet bills, got them healthy, and found homes for all of them. I took the runt and named her Bear; she lives with my mother, and is one of the great dogs of all time."