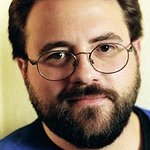 Film director Kevin Smith gave Eliza Dushku's charity birthday challenge a $1000 boost this week when he auctioned off a poster for his new movie.

Dushku launched a campaign to raise $30,000 for THARCE-Gulu – an organization that helps former child soldiers in Uganda heal from the traumatic events of war and sexual enslavement – by her 30th birthday on December 30. Clerks director Kevin Smith rose to the challenge by donating a poster from his upcoming film, Red State, to the cause.

“Who wants to use money to buy the affections of a girl out of your league?” tweeted the director. “We’re auctioning off the next Red State poster, this time so that Eliza Dushku can get her #303030bday wish!”

A bidder paid $1000 for the poster, prompting Dushku to tweet “Thank u baby.”