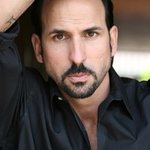 Oscar Torre's face is one you will probably recognize. His role in the recent CBS drama Cane is just one in an impressive list that encompasses theater, television, and independent film, including CSI:Miami, Ladron Que Roba A Ladron, Hunting of Man, and film festival favorite Rent-A-Person.

One of the profession’s true tall, dark, and handsome leading men, Torre first gained attention with the lead role in Libertad, in which he played a Cuban artist unjustly sentenced to 15 years jail. NBC-TV critic Maria Salas predicted Torre would “be the next Latin star”, and her prophecy looks set to come true.

Torre is constantly being sought out by top directors to fill challenging roles, but Look To The Stars was lucky enough to catch up with him and ask a few questions about his charity work, as well as his ideas on how to make the world a better place.

A few weeks ago you attended an AIDS fundraiser for the Charles Drew University of Medicine and Science. Tell us a little about the night and what attracted you to it.

I got the invitation from Latin Heat Magazine, who were doing the event in conjunction with Charles Drew Hospital. They said it was a fundraiser for AIDS, and that obviously caught my attention right away – because it’s an important cause and you’ve gotta be blind not to be affected by it.

Do you know anyone who has been affected by AIDS?

Oh yeah, definitely, over the years, in the theater and the entertainment industry. And years ago… I was a therapist for people who had alcohol and drug problems. I was a substance abuse counselor, and I worked in that field for eight years when I first started acting. I worked in a mental health hospital… we had many people who were HIV positive or had AIDS, and also we had an HIV testing program… so I ended up meeting a lot of people who ended up testing HIV positive.

What can people do about the AIDS problem?

There are many organizations that are out there helping; they can go online; you can donate money; you can donate time, you can volunteer to the hospitals – you should inform yourself, I think that’s the key. Some people are afraid of it, and they think that by not knowing about it then they are safe – [but] ignorance is dangerous.

In November you attended the 15th annual Diversity Awards, which celebrated cultural diversity in the fields of film and television. That’s obviously another issue that you are interested in. What is its importance to you?

We have people from all over the world come over here [to America], and I think that films should represent that. I think it’s getting a little better. My parents are Cuban. When I was growing up… there weren’t too many Cubans on TV… Steven Bauer on Scarface was a Cuban, and later Andy Garcia, but that was about it. I didn’t see many Cubans on the TV.

Cane obviously had a lot of ethnic diversity in it.

Yes, it was incredible, it was the first time ever that I found myself going to work and most people there were Spanish. And all these faces that you never see in the same place together… it was very diverse.

On your website you have a link to a children’s cancer charity called Padres Contra el Cancer. That’s obviously a cause close to your heart, tell me a little about that.

One of my jobs here when I moved to LA was as a Spanish interpreter at the Children's Hospital of LA. So having worked there, I saw firsthand the jobs the doctors, nurses, and everybody in children’s hospitals do. It’s their profession, but the passion that they have for these kids is amazing. And I saw true courage from these children I never imagined, and that courage from the kids and the parents and the professionals was something that really moved me.

As a kid I was an asthmatic, although I’m no longer, thank God. Up to the age of 12 I was very sick, so I spent a lot of time at the Children’s Hospital in Miami. So in a way, I owe them a lot.

What sort of work do you do for children’s hospitals now?

Whenever I’m on a talk show or something like that, I always mention them as one of the causes that people should support. It’s one of the advantages of being on TV, you have that vehicle that reaches thousands or even millions of people.

What would you tell someone who wants to help a cause?

I would tell people to find what you are passionate about, what has touched your life, and give. To give is very rewarding…you will be helping yourself.

In what way do you think you help yourself by giving to others?

It’s very rewarding to know that by doing a little on your part, just taking a few minutes or writing a check for a few dollars, it goes a long way for all these causes that are really fighting to be able to get money. And if you don’t have money, then give time. Do your part.

What would attract you to a charity? How could they gain your attention?

I try to look for the things that move me, something I’m passionate about.

I can only say for myself, I don’t know about other actors, but [charities] can always reach me, and if they are who they say they are and they’re a good cause, I’m usually more than happy to lend my name or even my presence. By giving them my presence, by mentioning them, I know I’m helping them… that’s one of the great things about being in the public eye, that you’re really able to help people in need, sometimes just by mentioning them. Because if you put that into money value of having to get PR or something, its worth a lot.

How can 1 person make a difference?

I think that by doing the little things… sometimes we think of a problem and we look at the big picture, [and we think] there’s nothing we can do about that. But if you think in your place, in your home, in your person, what you can do, what small things you can do to make them better, then you’re doing your part. At home, you can decide to be environmentally aware, what you throw in the garbage, how you dispose of things. If you deal with respect towards your neighbor, your neighbor will hopefully deal the same way with you. If everybody does all these little things, then I think it affects the world you live in, globally I think it translates into countries getting along – if you take one person at a time. If you do your part, if you are responsible, and are respectful, then I think it goes a long way. I think that’s what sometimes we’re lacking.

It starts at home. It starts as parents. Those people who are out there who are parents of little kids, they should teach them self respect and teach them to respect others, to care for the environment, to be respectful towards your neighbor. Then I think these little kids will grow up to be adults who grow up to act in the same way.

Do you think the way your parents brought you up has affected the way you live your life today?

Totally, I owe everything to them. I have a younger brother, and he and I have this conversation all the time. We are very clear that we are a product of the way we were brought up and the values we were taught. He’s a school teacher, and he [finds] the same problems he sees in the students when he meets the parents – he sees the same problems in the adults. The student’s problems are just a symptom of what’s going on at home. Unfortunately the students soon become adults, and the cycle will go on and on and on.

What made you become an actor?

I fell into acting by accident. For my last credit in college, I needed an elective, and the only class that was available at the time I could attend was an acting class. The girlfriend I had at the time signed me up for the class because I couldn’t sign up myself, I was very shy. She thought it would be very funny for me to be stuck in an acting class.

What’s your next project?

I’m going to Miami in two weeks to shoot a film that’s meaningful to me. It’s about school violence. I play a hostage negotiator who talks this kid out of killing everybody in the classroom. The story is the kid has been bullied, and finally the kid snaps, and kind of goes crazy and goes into school with a weapon, and takes a class hostage. So they call in a hostage negotiator. The film has a lot of heart, and it has a good message. And that’s one of the reasons why I took the project when it was offered to me, because I thought it was a good message.

Do you always try to pick roles that have a good message?

I try to do that whenever possible. Sometimes it’s not possible, but if the message is something I cannot get behind, then I will not do the project.

In one or two sentences, can you give our readers one final message on how they can make the world a better place?

Love yourself and love your neighbor.

Thanks very much for your time, Oscar, and all the best.