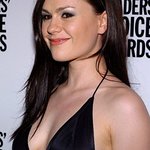 True Blood co-stars Anna Paquin and Stephen Moyer auctioned off a copy of their supernatural show’s script for charity.

The True Blood Season 3 Finale script was signed by the couple and the show’s creator, Alan Ball. The eBay auction brought in $978 for the Darnell family.

The family has recently suffered the tragic deaths of Father, Kirk Darnell, Mother, Missy, and daughter, Genevieve. The three family members died less than a year apart from each other, and left behind four grieving siblings.

As reported by www.allstephenmoyer.com : "Kirk Darnell was only 47 years old when he suddenly passed away eight months ago leaving his wife Missi and 5 children behind with no life insurance. The family was still reeling from this tragedy when on August 30th Missi and her 9 year old daughter Genevieve were struck and killed by a car while walking to a local convenience store. The remaining 4 children have tragically lost both their parents and one of their siblings in 8 short months.

“In support of the children, family members have opened the Darnell Memorial Fund and are actively raising funds and spreading the word.”

Deeply touched by the Darnells’ tragic story, the couple has also raised more than $2,200 for the family and continues to garner support from True Blood fans.