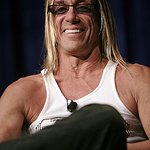 Days before his performance in Bodø, Norway, rock icon Iggy Pop has sent an urgent letter on PETA's behalf to Jonas Gahr Støre, Norway’s minister of foreign affairs, calling on Norway to make its World Trade Organization (WTO) case against the European Union’s ban on seal imports open to the public.

As Iggy explains in the letter, just one company in Norway purchases close to 80 percent of Canadian seal pelts, and this company has received funding from the Norwegian government for years.

Iggy, who recently starred in a PETA ad against the Canadian seal slaughter, joins music legends Joan Jett and Sarah McLachlan in requesting that the hearing and submissions be open so that the public will be fully informed and better able to submit comments to the WTO panel deciding the case.

“After learning that the World Trade Organization (WTO) will hear Norway and Canada’s case against the E.U.’s ban on seal pelts, I urge you to open up hearings to the public and make all submissions available to the public as soon as they are filed,” he writes. "Norway is wonderful, but there’s something that drives me nuts: Norway buys almost all of Canada’s seal pelts, where they are tanned and then shipped to countries that aren’t aware of the cruelty involved. I was blown away to learn from my friends at PETA that just one company in Norway buys close to 80 percent of seal skins from Canada and that the Norwegian government has helped fund this company for years. Norway is indirectly propping up the seal slaughter. I’ve seen a lot of vile sights in my days, but few were as dark and twisted as the beating of helpless baby seals for their fur.

“Anyone opposed to cruelty to animals can and should weigh in on this issue by submitting comments to the WTO panel deciding the case, but we need to know what information is being put forth. The Canadian government is desperately trying to further delay the phase-out of the commercial slaughter, which has been condemned by President Barack Obama, Vladimir Putin, and The Dalai Lama. The country is hiding behind its native people, but Inuit hunting accounts for only 3 percent of seals slaughtered. The E.U. ban provides an exception for indigenous people’s hunting, which protects such small-scale traditional practices.

“If Norway has nothing to hide, there should be no problem with making this process public.

“The whole world is watching. I hope you will not allow Norway to be a party to the largest massacre of marine mammals on the planet.”