Kevin McKidd Is One Tough Mudder For Charity 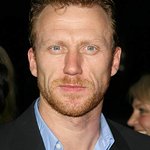 Scottish actor Kevin McKidd (Grey’s Anatomy, Brave, Percy Jackson) will soon trade in his doctor scrubs for a classic kilt as he gets down in the mud to raise money for Save the Children's East Africa relief efforts.

On Sunday, Sept. 18, McKidd will compete in the NorCal Tough Mudder in Squaw Valley, Calif. A 10-mile course designed by British Special Forces, the Tough Mudder — known for its mud pits, cliffs, and electric shock obstacles — is designed to test a participant’s strength, stamina, toughness, mental grit and camaraderie. McKidd will “mud it” alongside fellow actors Shemar Moore, Simon Mirren and the ‘Stray Dogs’ team while raising funds for the children affected by the food crisis in East Africa.

McKidd has been getting savvy with his social networks to raise money for the cause. In just over a month, McKidd has raised over $10,000, promising to don a traditional Scottish kilt during the Tough Mudder once he reached the $10,000 mark. Nicknamed ‘The Tough Giving Challenge’ by his fan site, KevinMcKiddOnline, McKidd continues to entice his nearly 14,000 Twitter fans to donate with just 140 characters.

“Was up at 5:30 back in the gym — dreaded it but was happy that by 7:30 I had done my work for the day- recovery shake, shower and to work!” McKidd tweeted after one of his early morning workouts with the Stray Dogs team.

“Kevin continues to keep the spotlight on the children of the East Africa food crisis with both his social media use and out-of-the-box fundraising methods,” said Save the Children’s President & CEO Carolyn Miles. “First with Save the Children’s 24-hour Fast-A-Thon and now the Tough Mudder, we are looking forward to seeing what extreme stunt Kevin will take on next.”

McKidd previously tweeted throughout Save the Children’s “Fast-A-Thon,” where he gave up food for 24-hours to show his support for the children affected by what has been termed as the worst drought in over 60 years. He also starred in a recent public service announcement for Save the Children. The PSA can be viewed here.