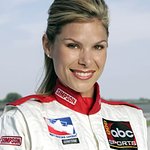 Car enthusiasts, racing fans, petrol heads – call them what you will, a large crowd of them turned out to watch ESPN pit reporter Jamie Little win the 32nd annual Toyota Pro/Celebrity Race at the 34th Toyota Grand Prix in Long Beach on Saturday.

A field of 18 celebrities and professional drivers slipped into gear and battled it out through 10 laps on the 1.97-mile street circuit, with 17 of them finishing – basketball Hall of Famer Nancy Lieberman got stuck on a tire wall on Lap 6. The field were racing Toyota Scion tCs, and it was a tight duel all the way, with Pixar producer/director Brad Lewis leading for the first 8 laps. A small altercation with the tire wall saw Lewis finish 9th overall, with Little holding off 2nd-placed NASCAR Craftsman Truck Series Champion Mike Skinner by 0.324 seconds.

“When you interview a winning driver after the race, they always tell you how they just try to get through that last lap,” said Little. “Well, now I know exactly what they’re talking about.”

The celebrity race has been held every year since 1977, and has attracted stars such as Gene Hackman, Jason Bateman, Rick Schroder, Stephen Baldwin, Donny Osmond, Sean Patrick Flanery, and Josh Brolin. Toyota donates $5,000 to Racing for Kids, a non-profit program benefiting children’s hospitals in Southern California, in the name of each celebrity racer, and another $5,000 to the winner’s charity of choice. The car company has donated close to $1.6 million to various children’s organizations since 1991.

“You go into the event with everyone out here wanting to help raise money for charity and have fun,” said Little, who will give her winnings to the UCI Reeve/Irvine Center in California, a facility that specializes in spinal cord injury research. “But when the race starts, the competitive juices take over and everyone wants to win.”

Another big-hearted participant in the race was fine jewelry designer and part-time Grand Am driver Sarena Traver, who earned her spot in the Pros with an $80,000 winning bid in the Boys' and Girls' Club annual charity auction.