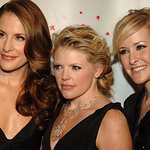 The Dixie Chicks, Willie Nelson, Lyle Lovett, George Strait and Christopher Cross were some of the artists who hit the stage for a concert on Monday to help victims of wildfires in Texas.

The celebrity charity concert in Austin raised over $500,000 for victims of the September fires that killed two people and destroyed over 1,500 homes.

“When they called us to do this show, there was zero hesitation,” Dixie Chicks singer Natalie Maines told the crowd. “You can take the girl out of Texas, but you can’t take Texas out of the girl.”

Willie Nelson also had words of support, after losing his own home to fire in the past: “You never really get over it. There’s nothing I can tell them to make it better except some of us have been there and done that and we survived it, and they will too. Be strong.”

Ray Benson – singer for Asleep at the Wheel and co-organizer of the event – was ecstatic about the number of stars who came out to help.

“Willie actually cancelled a show to do it,” he said. “Lyle also canceled an appearance… I just think the scope of devastation was so great and so close to home. The numbers in Bastrop were so overwhelming, how do you deal with something like that? And also you do feel … that we’re in a position to not sit on the sidelines and do something.”

The show was emceed by Kyle Chandler.

First Responders Children’s Foundation, the national non-profit organization that provides financial relief to the families of first responders who have been injured or killed in the line of duty, awarded a Public Service Hero Award to first responders from across America at A Celebration of First Responder Heroes, its 20th Anniversary Awards Gala and Concert, that was held at City Winery in New York on Wednesday, October 27th in tribute to National First Responders Day. More →