Celebrate Douglas Adams' 60th Birthday With The Stars For Charity 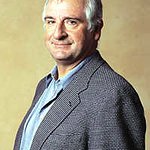 On what would have been Douglas Adams' 60th birthday next year, the Hitchhikers Guide to the Galaxy author’s family and friends – in association with Save the Rhino (one of Douglas’ favourite charities) – will be throwing a very special party in his honor.

An evening’s entertainment from some of the finest names in the world of science, comedy, conservation and music, this is one event that is definitely not to be missed. Rock stars of science such as Professor Brian Cox, Robin Ince and Jon Culshaw will talk on life, the universe and everything. Clive Anderson will interview Terry Jones and Michael Palin about Douglas’ comedy legacy and his influences, including Monty Python. Special comedy performances will feature The Meaning Of Liff’s John Lloyd, as well as Stephen Mangan, Sanjeev Bhaskar and many more, plus special guests from ‘Radio Active’

Music will be provided by the band that played at many of Douglas’ infamous parties – including members of Paul McCartney's band. And Last Chance To See presenters Stephen Fry and Mark Carwardine have recorded a special introduction about Douglas’ passion for conservation.

The event takes place at London’s HMV Hammersmith Apollo on March 11. More information can be found here, and check DouglasAdamsTheParty.com for special announcements.

More names to be announced. Line-up subject to change.