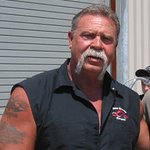 Paul Teutul Sr. has been announced as one of 18 contestants on the fifth installment of NBC’s The Celebrity Apprentice and is competing to help the Make-A-Wish Foundation grant more wishes to kids with life-threatening medical conditions.

“The combination of Paul’s passion for wish-granting and his business tenacity makes him a formidable competitor and Make-A-Wish advocate on “The Celebrity Apprentice” this season," said David A. Williams, president and CEO of the Make-A-Wish Foundation of America. “Paul reflects the big burly biker stereotype, but we also know that he, like thousands of motorcycle enthusiasts who ride, raise money, or help us in other ways to grant more wishes, also has a giant heart and we are grateful for his support.”

Participants on “The Celebrity Apprentice,” compete to benefit their selected charities, unlike contestants on “The Apprentice,” who participate in similar challenges to try and land a coveted job working for the host of both shows, Donald Trump. Photos and bios for all of the fifth-season cast members can be found at www.nbcumv.com.