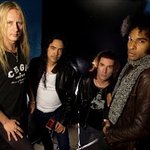 The Alice in Chains and Friends Fantasy Football League launched its 3rd annual charity auction on eBay this month.

The ten-day-long auction includes collectible items donated by league participants such as custom-made black denim pants, jacket, and studded belt worn by Jerry Cantrell during the Alice in Chains BLACKDIAMONDSKYE Tour; a glove personally worn and autographed by Randy Wolf; a Mad Men script signed by the cast of the show; a bass signed by Duff McKagan, a gold record signed by Ann Wilson of Heart and more.

Proceeds from the auction will be donated to league champion William DuVall’s charity of choice, Boys' and Girls' Clubs of America.

Click here to bid on one-of-a-kind memorabilia and contribute to a great cause. The auction runs until January 23.