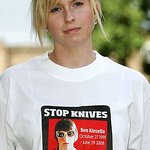 Celebrities, chefs and politicians from the UK are contributing their favourite baking recipes to the Celebrity Bake Book which supports The Ben Kinsella Trust.

Ben Kinsella was knifed to death in June 2008 in Islington. He was just 16 years old. His sister, Brooke Kinsella (who is an actress and was in EastEnders) and her family created The Ben Kinsella Trust to raise awareness about the growing problem of knife crime.

Later on this year Brooke will be launching a project to take a knife crime awareness exhibition to schools throughout the country. The intention is to educate children of all ages about the consequences of knife crime and what it can do to a family. The trust aims to educate children as young as primary school age in the difference between right and wrong and against ever picking up a weapon, be it through peer pressure, fear or simply believing it is cool. The Trust also hopes, one day, to build a youth centre in Ben’s name in Islington to help protect, support and nurture the kids on our streets.

The book is the idea of Linda Morris who contacted the celebrities via Twitter and asked if they would donate a recipe to her book. Mary Berry was the first to reply and dozens of others followed quickly. She was inspired to produce the book because of her family connections to Islington, where Ben Kinsella was murdered.

The book is being published by Accent Press who previously produced Food For Heroes (The Official Help for Heroes Cook Book) and East Meets West which raised money for Tsunami relief.

Hazel Cushion, Managing Director of Accent Press, said “This is such an important project and we are delighted to be involved. It is wonderful that Linda Morris already has so many key contributors and the interest from people wanting to be involved is astounding.”