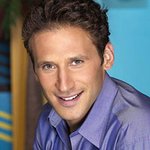 Patients and their families were treated to an unforgettable event where they were showered with love and attention.

Chelsie Hightower of “Dancing With The Stars” traveled all the way from Utah to spend Valentine’s Day at Children’s Hospital Los Angeles, and the kids loved spending time with her. Chelsie said while she is not particularly romantic herself, she would much prefer to spend the day giving back and making a difference in the lives of children. Chelsie was also catching up with her friend, and “Dancing With The Stars” champion JR Martinez at the party, who said how excited he is to become a father when he welcomes his daughter this year. J.R. gave the patients his undivided attention as he listened intently to their stories. He was overheard sharing words of encouragement with the children and telling them how much they inspired him.

It was a family affair for two Hollywood families. “Royal Pains” star Mark Feuerstein attended with his wife Dana and their daughter Addie, while Nestor Serrano, whose new movie “Act of Valor” opens this month, attended with his wife Debbie and their daughter Lucy. The Feuersteins and the Serranos are big supporters of Children’s Hospital Los Angeles as their daughters Addie and Amelia respectively, have both received incredible care at the hospital. Edwin Hodge, the newest addition to the hit ABC show “Cougar Town”, attended with his mom Yolette and were both having fun making Valentine’s with the kids. TV host Quddus Philippe stopped by to share love with the kids en route to the airport for his charity mission to Haiti.

Corbin Bleu from the hit movie franchise “High School Musical”, made chocolate jewelry with the CHLA kids at Grando Cioccolato’s popular station. Guests loved Nancy Grando’s organic and gourmet Italian dark, milk and white chocolate “diamonds.” Adorable Hollywood couple Rachael Leigh Cook (“Perception”) and her husband Daniel Gillies (“The Vampire Diaries”), spent time making custom Tiny Prints Valentines with the kids and their families. Rachael and Daniel were also cheering on the CHLA kids who had beautiful artwork painted on their faces by Parties by Stacey. Daniel plays a doctor on his new show “Saving Hope” this summer and comes from a long line of doctors in his own family. He remarked that hearing the amazing stories of courage and triumph from the Children’s Hospital Los Angeles patients was both inspiring, and made the role he’s about to play as a doctor that much more meaningful.

The children and their mothers were treated to glam makeovers by the beauty artists at Sue Devitt Beauty and everyone was gifted with a shimmery pink lip-gloss. All of the children were so excited when they picked out their pink and blue teddy bears from Build-A-Bear Workshop and their CDs and DVDs filled with children’s music from Baby Genius. The kids were excited that EA games donated some of their most popular video games titles to the hospital’s Teen Lounge.

Amy Malin of Trueheart Events welcomed the guests to the party and introduced CHLA patient Eileen Garrido who spoke eloquently about the care she received when she was a patient at the hospital. 12 year old Eileen then impressed everyone at the party when she performed a beautiful song that she wrote and dedicated to Children’s Hospital Los Angeles. Eileen received thunderous applause after her performance. “American Idol” finalist and recording artist Elliott Yamin, who is a long time supporter of Children’s Hospital Los Angeles, performed two songs from his new album due out in March. Joined by his co-writer/producer Brett Nolan on the keyboard, Elliott wowed guests with his soulful performance. Elliott’s new single “3 Words” just came out on iTunes and is sure to be another smash hit for him.

Guests were then treated to another special musical performance by rising star Austin Brown. Born into the Jackson family musical dynasty, Austin is a natural born talent. Austin was accompanied on guitar by Angie Swan, and together they performed two songs to rave reviews. CHLA patient Hayley sat next to Austin during his second song and was mesmerized by his performance. Austin said he couldn’t think of any place he would have rather spent Valentine’s Day than at Children’s Hospital Los Angeles. Austin’s new single came out today and is available on iTunes.

Children’s Hospital Los Angeles has been named the best children’s hospital in California and among the best in the nation for clinical excellence with its selection to the prestigious US News & World Report Honor Roll. Children’s Hospital is home to The Saban Research Institute, one of the largest and most productive pediatric research facilities in the United States. The hospital is also one of America’s premier teaching hospitals through its affiliation since 1932 with the Keck School of Medicine of the University of Southern California.