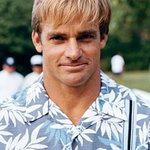 The world’s greatest big wave surfer, Laird Hamilton has teamed up with Steve & Barry’s to launch the Wonderwall collection of surf and skate apparel for men, which includes a unique t-shirt that will benefit autism awareness.

The collection includes 165 high quality items all priced at $9.98 or less, and one of those items was created for a special cause-battling autism. Hamilton’s line includes a limited edition graphic t-shirt that will be sold with a portion of sales supporting Talk About Curing Autism (TACA), an organization that provides information, resources, and support to families affected by autism. Hamilton became involved in the effort to cure autism when film partner and close friend Don King’s son was diagnosed with the illness.

“Autism is a cause that is close to my heart, " said Hamilton, “It touches the lives of so many families, and I’m very proud we’re able to support TACA’s efforts through Wonderwall.”

Hamilton’s commitment to the cause will also be showcased through the documentary, Path of Purpose, which chronicles his 500-mile trek across the Hawaiian Islands to raise funds so his friend King could make a film about his autistic son. The documentary is set to debut on the Sundance Channel in July.

Hamilton is best known for pushing the boundaries of water sports, being the first to complete a 360-degree loop on a surfboard and performing marathon-like paddleboard journeys around the world. This new collection is Hamilton’s first clothing line, inspired by his sense of style, attitude and overall approach to life.

Visit www.thisiswonderwall.com for more information on the line and store locations.