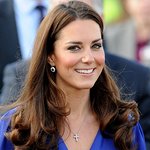 The Duchess of Cambridge gave her first official public speech this week, praising a children’s hospice for its “inspirational” work.

Her Royal Highness looked confident as she stood in front of staff and volunteers from a charity and paid tribute to their efforts helping children with life-threatening conditions. The Duchess, who is patron of East Anglia's Children's Hospices (EACH), was in Ipswich to launch the organization’s new facility – the Treehouse – where dozens of young people and children are cared for by dedicated staff.

Her Royal Highness told her audience: "First of all, I’d like to say thank you. Thank you for not only accepting me as your patron but thank you also for inviting me here today. You have all made me feel so welcome and I feel hugely honored to be here to see this wonderful centre.

“I am only sorry that William can’t be here today; he would love it here. A view of his – that I share – is that through teamwork, so much can be achieved. What you have all achieved here is extraordinary. You as a community have built the Treehouse; a group of people who have made every effort to support and help each other.

“When I first visited the hospice in Milton, I had a pre-conceived idea as to what to expect. Far from being a clinical, depressing place for sick children, it was a home. Most importantly, it was a family home, a happy place of stability, support and care. It was a place of fun.

“Today I have seen again that the Treehouse is all about family and fun. For many, this is a home from home – a lifeline, enabling families to live as normally as possible during a very precious period of time.

“What you do is inspirational, it is a shining example of the support and the care that is delivered, not just here, but in the children’s hospice movement at large, up and down the country. The feelings you inspire – feelings of love and of hope – offer a chance to families to live a life they never thought could be possible.

“So thank you again for inviting me here today. I feel enormously proud to be part of East Anglia’s Children’s Hospices and to see the wonderful life-changing work that you do. Thank you.”

The Treehouse has revolutionized children’s hospice care across Suffolk and north Essex, and was only made possible by the generosity of donors who supported the Treehouse Appeal. raising £3 million in less than 12 months. EACH’s former hospice in Ipswich was too small and unable to meet the demand from the surrounding counties.

The new centre has a hydrotherapy pool and dedicated sensory and music rooms and also features more bedrooms, reducing the need for short-break care to be cancelled if end-of-life care is being delivered.

EACH Chief Cxecutive Graham Butland said: “Everyone at Each is honored and extremely proud to have the Duchess of Cambridge as royal patron.”

He added: “Having our work recognised in this way by Her Royal Highness is not only a tribute to our staff and supporters, but a huge boost for the children, young people and families receiving our care and support.”

The Duchess heard a performance by 10-year-old singer Bethany Woods, who gave a spell-binding rendition of a song made famous by The Muppet Movie, Rainbow Connection. In a hushed music therapy room, which moments earlier had been filled with a cacophony produced by percussion instruments played by children receiving treatment at the hospice, the she began to sing.

Bethany was diagnosed at the age of 22 months with merosin negative congenital muscular dystrophy, which causes poor muscle tone, tightness in the joints and respiratory problems. She receives a wide range of care from the hospice to alleviate her condition but especially loves taking part in music and recorded a song for the hospice’s recent fundraising appeal DVD.

Her Royal Highness then attended a reception for staff and supporters of the hospice and confessed to one guest as she touched her heart: “I find doing speeches nerve-wracking.”

When she first arrived, The Duchess joined a large table where siblings of children being treated by the hospice were relaxing, painting small animal figures.