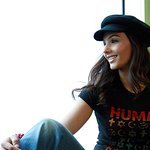 Somy Ali is a former Bollywood actress devoted to human rights, and Look To The Stars’ Abhishek Seth filed this feature on her outstanding charity work.

A Pakistani woman on the other line rasped for help. Her husband had just stormed out the door, after threatening to thrash her and her daughter with a cricket bat. Amna wanted to get out. Having noted down Somy’s number from a local Indo-Paki grocery store some time back, Amna Zafar finally mustered the courage to call: before her man came back.

Somy picked up the phone. And listened. She immediately knew what to do, calmly telling Amna to gather her purse, passport and any other documents, while she phoned a taxi. Half an hour later, Somy heard her dog bawl outside in the moonlight: Amna had arrived — with documents in one hand, and her heavy-eyed daughter in the other.

Guiding them up the stairs, Somy opened her home to the strangers.

The hostess and the woman talked for hours that night, over a warm cup of nostalgic chai. Amna poured her heart out to Somy, recounting her life’s story from her young days in an old-world village nestled in the majestic Himalayas, to her suffocatingly abusive marriage.

Entertainment celebrities uncommonly take advantage of their power for the betterment of society like this. Very few embrace their power like this. Somy is one of those rare gems who do.

In addition to launching her own, socially conscious clothing line So-Me Designs – through which she spreads positive messages about diversity, the environment, religion and peace – the seasoned Bollywood actress spends all of her days tending to abused immigrant women through her nonprofit No More Tears.

Since No More Tears (NMT) was born in 2006, Somy has rescued 175 women from spousal abuse. Although she originally started with the intention to just help Indians and Pakistanis, over the years her generosity has touched the lives of Russians, Cubans, Jamaicans and Venezuelans, among others. In the lives of these victimized women and children, the severity of abuse has varied tremendously.

On any given day, the Florida-based human rights advocate Somy provides food, shelter, clothing and transportation to these women and children, who are verbally, physically and sexually abused.

“I think it is very amicable what she is doing right now, totally sacrificing herself to help other people,” expresses Somy’s brother Mohammad Ali. “I know I couldn’t do it — giving up my needs and wants to satisfy others.”

A Board Member of No More Tears, Laura Finley, agrees: “Somy is beautiful—both physically and in her spirit and her heart. She is perhaps the most giving person I know. She will do anything to help someone—not just friends, but strangers as well.”

Somy, however, was not always catering to those less fortunate on a regular basis. When she turned 15, she dropped out of high school and packed her bags to leave for Mumbai, in hopes to join the Indian film industry and pursue a career in modeling.

“I was happy for her… I was excited for her… I had great confidence in her,” reflects Mohammad with a smile. “She had all my blessings.”

Soon after Somy shifted to India, she began her flourishing career in Bollywood from 1992 to 1999. Not only did she appear in nine movies with noteworthy actors, but also worked in commercials and fulfilled her modeling dream. Attracting the public’s eye, Somy became even more sought-after, once her former relationship with Bollywood’s prominent actor Salman Khan was discovered.

During her increasing stardom, Somy naturally became disgusted by what she says was the “industry’s mundane superficiality.” Leaving her fame and glory across the ocean at a youthful age of 22, she decided to start her life anew, returning to America, where she matriculated at the Nova Southeastern University (NSU), and earned her first bachelor’s degree.

Mohammad humbly accepts his influence over his sister’s education on return. “I know I did definitely inspire her… to go get her degree,” he joyfully explains. “I knew that she was very passionate about learning. So, I figured: ‘No better place to learn than an institution of higher education.’”

Unbeknownst to him, Somy not only earned a bachelor’s degree in psychology from NSU, but eventually garnered two more bachelor’s degrees and a master’s from three other schools, all in a span of six years—after withdrawing from the glamorous film industry.

Somy’s steadfast friend, Wafa Abdulrazzaq, reminisces about her first encounter with the brown-hair, brown-eyed bookworm. “Somy came across as shy, sweet, and very caring when I first met her at NSU,” esteems Wafa. “I had no idea about her Bollywood history.”

Somy’s close friend continues to express the former actress’ approachable demeanor, adding how Somy “really wanted to know more about her, her background, her history.” Wafa later remarked, “I remember thinking: ‘I never really met anyone in college before that just seemed so selfless.’”

A few years later, between degrees, the model-and-actress-turned-filmmaker discovered a passion for documentary films. She enrolled in the New York Film Academy, eventually producing three short films on themes close to her heart: teen suicide, abortion and domestic violence.

In 2005, inspired by an Op-Ed about a Pakistani gang-rape victim Mukhtaran Mai, Somy contacted people “like crazy” to get a hold of this suffering soul. Within a year, Somy wrote, directed and filmed a documentary about Mai’s plight: I Can Survive.

“I toured all of U.S. with Mukhtaran Mai, and met Hillary Clinton, who eventually aired the short film at her benefit," earnestly shares Somy, with a great, big smile. She later told me she was inspired by Mai’s story and cause to establish her nonprofit No More Tears to tackle domestic violence.

Since then, especially in “the last two years, Somy has focused her efforts largely on assisting victims and their children,” recounts the NMT Board Member Laura Finley. “She has been incredibly successful, having helped nearly two hundred women escape abuse.”

Laura continues, “I also love the way NMT is organized. I did not love the bureaucracy I felt and saw with other nonprofits. I like that we are all volunteers and run in a very human-focused manner.”

Watching Somy from her first days back in America, after Bollywood to her current social work with No More Tears, Wafa comments on Somy’s transformation as a person: “Perhaps you could say Somy was slightly unsure of herself when she moved back here and started college,” mused Wafa out loud.

“Currently she exudes confidence. She is sure of herself. No case is too big or too small for her to take on when it means helping a woman get out of an abusive situation,” says Wafa. “That deep sense of love and caring I understood from her when I met her for the first time is now exuded on a daily basis in everything she does.”

Mohammed calls to mind memories even before No More Tears was founded, when they were both growing up: “She was always giving and caring; both of us, whenever we saw someone who was in need, if we were able, we would help them, whether giving food or money.”

The future for No More Tears and Somy is equally promising.

“Somy will continue for years to come to assist victims of domestic violence,” projects Laura. “I know both she and I want to engage in other forms of violence prevention. So down the road we will see NMT working on other related issues like poverty and diversity.”

Mohammad envisions the next 10 years, as well: “I can see her running her nonprofit on a national level, rather than just a regional and local level. And having a full-time staff working for her, and basically a group of other people who are like-minded — and going out and changing the world for the better; and having a direct impact on people’s lives for the better.”

Somy herself describes the future she aims to acquire. “I want to get a platform where I can make things happen quickly and sooner than I am right now,” voices the human rights spokeswoman. “I am yearning to get to a level where people will listen to me about domestic violence and do something about it right away.”

The advocate admits in an interview, “It’s sad to me that people don’t care,” later specifically referring to other celebrities and their lack of social work like what she does for victims like Amna Zafar.

“Somy completely works from the heart,” affirms Wafa, before reciting the most important lesson she has learned from her best friend all these years: “If you do things with purity and love, no matter the outcome, you did your best and whatever was supposed to happen, will happen.”

To learn more about Somy, No More Tears and all the things she is doing, friend the former Bollywood star on Facebook.

This piece would not have been possible without Mohammad Ali, Wafa Abdulrazzaq, Laura Finley and the great Somy herself!

Joan Hornig is one of those women you notice from a mile away. She wears her skin confidently, which makes her jewelry sparkle even brighter. More →