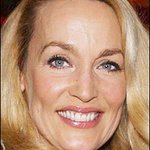 Model Jerry Hall has vowed to sell her lace Antony Price wedding dress, worn for her 1990 marriage to Mick Jagger in Bali, in a new charity auction.

The dress will join a range of the star’s designer clothes on sale – 429 items to be exact – including a white silk wedding kimono given to her by the Rolling Stone, a beige satin evening outfit worn to dinner with President Clinton at the White House, an 18th century-style ivory gown worn to the Queen Mother’s 80th birthday party, and a black taffeta dress worn on a night out with Jagger, as well as couture by Vivienne Westwood, Dior, Balmain, Thierry Mugler, and Balenciaga. Most lots will be sold for less than $1,000 to give everyone a chance to take part, and the money will go to Emmaus, a British charity for the homeless.

“Jerry wants this auction to be accessible to everyone,” said fashion specialist Kerry Taylor. “She wants to raise as much money as possible for charity, but she also wants the prices to be affordable for anyone.”

The auction starts June 10 in London at Sotheby’s Olympia, after a two day preview.

“I have led a very glamorous life in many ways,” said Hall. “But I know all too well how quickly lives can become derailed.”