Damon Hill Gets On His Bike For Charity 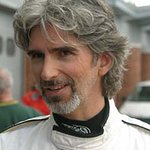 Formula One World Champion Damon Hill cycled 250 miles over the weekend (May 4-6) through cold and rain to take part in the Two Boats Cycle to raise money for the Halow Project.

Hill, along with 40 fellow cyclists, set off from Putney Bridge, pedaled to Newhaven to catch the ferry to Dieppe, and cycled onwards to Pegasus bridge in Caen. After a brief pit-stop, they returned to the Channel, took a ferry to Portsmouth and cycled to the finish line at Guildford on Sunday afternoon.

George Willis, from GM Recruitment whose charity is the Halow Project, said:
“The whole ride was unbelievable. Since arriving back on Sunday, it has been a blur…We hardly had any sleep in 48 hours and cycled 250 miles through hilly terrain in dark, cold and rain. It was much more of a challenge than anyone realized but we rose to the challenge. I think everyone should be extremely proud of themselves.”

Hill – who is patron of the Halow Project – was joined on the ride by his son Josh, 21, and wife Georgie.

Before the race, Hill commented: “I’m not looking forward to this at all. But it’s for Halo, so I’ll be peddling like Chris Hoy, big thanks to everyone taking part. We love you.”

The Two Boats Cycle has been organized to raise money for learning disability charity the Halo Project, which gives support to 16 to 35 year olds.

“I am completely inspired and in awe of what these guys achieved, it just restores one’s faith in human nature,” said Yvonne Hignell, director of Halow Project, “To see more than 40 people undergoing what seems to me like three days of torture on our behalf is incredible. George Willis is an angel, as are all the cyclists. One of our founders, Martin Day, cycled with them, all the while thinking of his daughter, who was one of the young people who inspired the foundation of Halow project.”

The original goal was to raise £30,000 but the Formula One champ and friends smashed the goal and have raised close to £50,000.

Damon Hill Comes Out Of Retirement For Charity May 24, 2012

Just two weeks after taking part in the first leg of a mammoth cycle ride which raised over £40,000 for his charity, Damon Hill took to four wheels for the first time in 13 years at Brands Hatch this weekend! More →