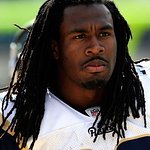 NFL great Steven Jackson (St. Louis Rams) has earned the top honor of rushing for 1,000 yards for seven consecutive years, but this NFL superstar has his eye on earning top honors off the field in his mission to help kids stay in school.

In 2004, Jackson created the Steven Jackson SJ39 Charitable Organization with a goal to empower and inspire the nation’s youth to overcome adversity so they have a chance to pursue their dreams. He remains on the forefront of addressing the increasing school drop-out rates – in St. Louis as well as Las Vegas, Nevada – while championing the fight against illiteracy.

The youngest of three children, Steven credits the solid upbringing he received from his hard-working parents and the impact of good Christian values, discipline and solid work ethics they taught. He might have been making big plays on the gridiron for his high school football team, but he also knew the importance of getting good grades – something his parents instilled in him from an early age.

Out of all the work he does with the younger generation, Jackson believes that being a role model in teaching our youth fiscal responsibility and the importance of staying in school, could be the most important lesson of their life.

Jackson has already made a very impressionable name for himself in the sports world and in business, however, it’s his work with the next generation that caught our attention.

Look to the Stars spoke with this impressive running back about his inspirations, goals, and unrelenting drive to be an amazing role model to the next generation.

You are pretty engrossed in helping kids, what sparked this interest in helping youth?

I saw a need in the Vegas community because a great number of our students are barely graduating – our dropout rate is really high, education is lacking. We don’t have the same advantage of recruiting some good teachers. I wanted to attack this, I wanted to attack student illiteracy and let them know that there is someone from where they are from, who walked the same hallways as they did and who made it. And I not only made it because I’m athletically gifted, but I made it in other areas as well too. I had the chance to have academic scholarships, so I wanted to do away with the notion that you had to be a dumb jock as well as give them two goals – always stay in school and you can’t put a price on education.

Has there been a decline in dropout rates in the past five-six years? Or is it increasing?

That’s a tough issue, that’s more of a political issue where a lot of times we have State budget cuts that hit education first.

So what do you think is the best way to prevent kids from dropping out of school?

I think the best way is to get them involved in after-school programs. Kids often have a lot of free time on their hands, so if we can get them involved – it doesn’t have to be athletic, we get them in leadership programs, even involved with student body activities so they can use their time wisely and grow as young adults. A lot of times, especially children in the Las Vegas area, they get caught in having to help bring groceries and money into the household and they assume the responsibility of being the head of the household as well. But we don’t want them to lose sight of the price of education and you can’t assume that you can go back and do something over. You take advantage of it now before it becomes an issue later in life when you wish you would have stayed in school and pursued your education.

What, if any, skills have you taken from the field that you can draw upon in real life, that can help you achieve your goal of fighting drop-out rates, illiteracy and financial responsibility?

Well not necessarily on the field, but just being part of a team, you know, you have your coach, your teammates and a lot of times we need to learn how to trust other people to do their job so we better can do ours. Life kind of works like that, so I try to use the analogy of team dynamics to help kids understand that there is a lot of work involved in what we as individuals can do on our own, and we need to reach out and ask for help and trust that other people will do their job so it all comes together.

Your foundation supports a number of organizations, tell us a little bit about who and why you chose those particular charities?

There is an organization based out of St. Louis called Little Bits, and they provide clothing and an outlet where kids can come talk if they have issues at home. It is a very, very good program that I’m honored to be part of. Another program is Three Squared in Las Vegas Nevada. It’s a program where we send kids home with a backpacks full of healthy nutritious food for the weekend because a lot of kids don’t have a chance to eat when they’re not at school. Another organization is Covenant House in St. Louis that helps kids who are homeless and have nowhere to go. They support their needs, help them continue their education, some of them are older teenagers around 17-20 age group which is overlooked a lot because they are young adults and people don’t want to help them anymore.

You were recently quoted in Vegas Seven Magazine as saying: “If there’s that one kid or that one fan that has an interaction with me that lasts a lifetime, I feel that’s my purpose in the universe.” Have you met any kids or fans that inspired this quote or were you speaking in general terms?

It’s generalized. I meet young kids all the time when I travel – even when I have my camp, which is coming up in a few weeks – they see me as larger than life, someone they’ve seen on TV, but when I actually talk to these children, I don’t talk to them about football, I talk to them about life, school and the importance about being a leader among their peers or in their household with their siblings because these things carry over not only into school, but in life. So I want them to know that yeah its cool that I play in the NFL, that I play a game for a living, but I want them to understand that there is much more to life that playing a football game.

Tell us about your foundations back to school program?

Yes, our Back to School program provides kids with supplies and notebooks, and also we help the kids in the neighborhood. We’ll take them to a local barbershop and pay for the kids to get a haircut so they also can be confident.

You also mentioned that you have aspirations to be behind the camera in efforts to inspire and recently attended the NFL boot-camp for film-making – if you were asked to film a movie right now, what would the storyline be?

I would be interested in doing a movie based on football players but not be the star. Everyone knows the star, it would be a journey about an athlete who didn’t quite make it in his career, he moves from city to city and he has a lot of issues with his family and his confidence. I would dig deeper into that realm.

You’re also known for your extensive travels. Is there anything you experienced during your journeys that changed or inspired your perception of helping others?

Yes. There was one particular time that I was Namibia visiting this school for orphans in Africa. In this school the children were so bright and thankful, and I was telling them my life story and where I was from and seeing how interested they were, how they identified with me even though we were miles away from each other. It just let me know that there is such a need not only in Las Vegas and St. Louis but all over. Everyone wants to be loved and to know they are cared about, and the more I can give the more I shall do so.

Imagine a room full of people, they are all looking up to you for inspiration. If you could ask them all to do one thing for each other, to better this world, what would it be?

Pray for each other. With the power of prayer a lot of things come together. I think its helps us learn what’s blocking us and helps us become better people. So that would probably be the one thing I would ask them to do.

Any other athletes or celebrities you feel are making a positive difference in this world?

There are a number of athletes who help tackle the same issues. Andre Agassi has a boarding school in Las Vegas that is doing really well, and it’s something I hope to be able to do – have huge impact in the community like he has.

And finally, if you had a theme song, what would it be?

I would have to say the theme song to Superman.

Look to the Stars would like to thank Steven Jackson for taking time out of his busy schedule to speak with us, and more importantly, for all the good he is doing to improve the lives of children around the world.