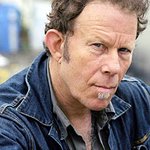 Tom Waits is auctioning off five pairs of premium tickets to shows in four cities along his current tour to benefit five charities.

The 58-year-old – whose songs are soon set to be covered on the debut album from Scarlett Johansson – is selling tickets to shows in Phoenix, Houston, Columbus and Atlanta for his upcoming Glitter and Doom tour, and proceeds will go to the Young Adult and Family Center, Summerfield Waldorf School, the Children’s Village of Sonoma County, the National Alliance on Mental Illness, and Catholic Charities.

“Some folks prefer to pay more – you get a good seat, a good tax write off, and a good feeling for helping for your needy neighbors,” said Waits. “It’s scalping for charity.”

The auction can be accessed through Ticketmaster. The auction for the Phoenix show will end Friday, June 13, while the other three auctions will end Thursday, June 19. Although each of these four shows has been sold out, Waits held back these choice seats to donate the proceeds to charity.