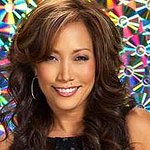 Carrie Ann Inaba has launched a new animal charity, and it needs your support.

The CAI Animal Project was established in partnership with EIF to support the rescue, welfare and well-being of animals.

Launching the charity has been Carrie’s true ongoing goal since starting her career in the entertainment industry, 25 years ago. It is her dream come true to start her own foundation to help animals in need.

Carrie Ann Inaba was born in Honolulu, Hawaii and lived on a wildlife preserve most of her childhood, surrounded by all types of indigenous Hawaiian wildlife, in addition to her own family of dogs, cats and fish. Due to that unique circumstance, she has always considered herself a protector of the animals. Coming from a childhood where she had her own personal struggles and was too young to speak out, she has always felt the need to protect those who don’t have a voice. Animals are her passion. Carrie Ann has been active in the animal rescue community for many years and herself has 4 cats and 2 dogs, all beautiful rescues. She has won numerous awards for her work with animals and continues to be a bright light of hope for any animal in need.

To find out more about how you can support the CAI Animal Project, visit the website and Facebook page.

Carrie is also currently running an auction to raise funds for her charity that gives you the chance to be in the audience for Dancing With The Stars and to join her for dinner. The auction can be found here.