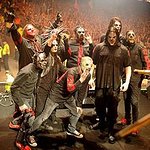 Tickets were on sale for $25 at livenation.com or at the Gramercy box office.

Items from ESP Guitars, Affliction Clothing and Live Nation were auctioned throughout the evening with all the proceeds donated directly to Hurricane Sandy victims in the city.

Back in October of 2012, New York City and the immediate surrounding area were pummeled by Hurricane Sandy leaving thousands of New Yorkers homeless or displaced. Multiple events have been planned in the wake of the storm because New York was so poorly prepared for what happened that fateful week.

To find out more about Rock for Recovery and other events happening in and around New York City check out www.nyc.gov.