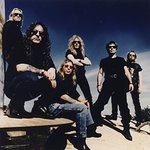 Co-founded in 2012 by legendary Iron Maiden manager Rod Smallwood and editor-in-chief of Metal Hammer and TeamRock, Alexander Milas, the Heavy Metal Truants cycle a gruelling 168 miles from London to Castle Donington in the East Midlands. Their arrival coincides with the Download Festival at the iconic rock music venue.

But the Heavy Metal Truants, who are sponsored by TeamRock, don’t want to stop at riding their bikes, they have other events across the year to support these worthy causes, and have also teamed up with CharityStars, Britain’s leading online charity marketplace, to auction 23 one-off pieces of music history.

The first is a Monitor Audio speaker system, signed by no less than 25 rock stars at the 2013 Classic Rock Roll of Honour. Signatories include Rush, Black Sabbath, Status Quo and Thin Lizzy.

There are also a couple of Slipknot items including nine original, hand-drawn portraits of the current Slipknot line-up, completed by world-famous comic artist Charlie Adlard who is best-known for his work on the Walking Dead comic book.

To commemorate the 35th anniversary of Birmingham band Judas Priest, a brand new Artist Series Guitar (ASG) signed by the current members is up for grabs. This is a true limited edition, being one of only 30 produced. It features solid mahogany body, rosewood fingerboard, trapezoid inlays as well as custom ASG Arsenal pickups and the chrome ASG headstock emblem.

Another item included in the auction is a Shure SM59 microphone used by Roger Daltrey when The Who visited Australia during their 2009 tour. Not only has Roger used this microphone, he has signed it too.

The list of auction highlights wouldn’t be complete without an item from Iron Maiden, whose manager has been so instrumental in establishing Heavy Metal Truants. This auction is for an original gold presentation disc of Iron Maiden’s 1985 live album Live After Death, recorded at California’s Long Beach Arena and London’s Hammersmith Apollo during the band’s now legendary 1984/85 World Slavery Tour. The item was personally donated by Iron Maiden and is signed by Bruce Dickinson.

In addition to these incredible items, also available to bid for on CharityStars are the following:

These auctions are live and close on Tuesday September 1

For further information, and to bid, please click here. ﻿