Oscar-nominated and award-winning actor Terrence Howard joins the Colon Cancer Alliance for a new public service campaign to raise awareness and encourage people to get screened for colon cancer – the second leading cause of cancer-related deaths in America, but largely preventable with appropriate screening.

Howard is the first national ambassador for the Colon Cancer Alliance’s new awareness campaign titled, “Sons and Mothers.” High-profile individuals like Howard, whose mothers have either survived colon cancer or lost their battle to the disease, will urge others to pay attention to this life-saving message and in doing so will pay tribute to their moms.

“I miss my mother’s voice and her gentle kindness. But despite my loss, my mom would love to know that her battle with colon cancer helped save others,” said Howard.

The print campaign launches this month and will be distributed in national magazines and leading newspapers nationwide. The core message: "If you or someone you love is at high-risk, age 50 or older or, if colon cancer runs in your family, get screened – it saves lives. Acclaimed photographer Nigel Parry photographed Howard in New York City.

So often women are most fearful of women’s cancers like breast and ovarian cancer. They tend to overlook their risk for colon cancer. Unfortunately, many people still believe the misconception that colon cancer is “a man’s disease.” Virtually equal numbers of women (69,140) and men (73,680) are diagnosed with colon cancer each year. Sadly, it remains the second leading cause of cancer death in the United States.

In an overall effort to raise awareness about this issue, the Colon Cancer Alliance has organized several events, speaking engagements, and patient support programs throughout March for National Colorectal Cancer Awareness Month.

For example, Teri Griege, an Iron Man World Champion Athlete and stage IV colon cancer survivor, will be featured as one of the Colon Cancer Alliance’s female ambassadors. Teri’s story reinforces that both women and families at high risk need to get screened. The day Teri was diagnosed with colon cancer was the day she saved her family’s life. After being screened at Teri’s insistence, her two sisters and two of four nieces were diagnosed with either colon cancer or had pre-cancerous polyps. 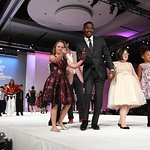 The Global Down Syndrome Foundation (“Global”) raised a record-breaking $2 Million at the 7th Annual Be Beautiful Be Yourself Fashion Show on Saturday, October 24, 2015 at the Colorado Convention Center. More →