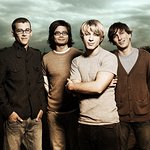 The band’s sophomore effort, The Light Meets The Dark (May 2010), debuted at No. 1 on the Nielsen Christian SoundScan chart and produced Billboard’s 2011 No. 1 Christian song of the year, “You Are More.” In 2012, Tenth Avenue North released its anticipated third album The Struggle on Aug. 21, with the first single, “Losing,” peaking at No. 2 on the Billboard NCA radio chart. To date, Tenth Avenue North’s debut album, Over and Underneath, has surpassed 420,000 sales, while the band’s combined album sales total more than 700,000.

Google trends for "Tenth Avenue North"
Available to Insiders only
Get Insider Access to these insights & more...

You can contact Tenth Avenue North using details from this service. (Or read our advice on how to contact celebrities)

We don't have any videos related to Tenth Avenue North.