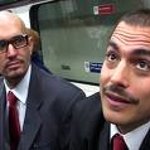 The Yes Men are a group of activists who “target people they see as criminals and steal their identities to try to make them honest.”

They bring attention to prominent politicians and business organizations by impersonating them and/or representatives, and by creating fake web sites to parody controversial ideologies.

In 1999, The Yes Men created a fake George W Bush website to bring attention to the hypocrisies portrayed on his real site, and in 2004 they rallied Bush supporters to dump nuclear waste in their back yards and send their children off to war.

The Yes Men made their first film (called The Yes Men) of their exploits to raise political consciousness in 2003.

In 2004, The Yes Men impersonated a Dow Chemical spokesman on the BBC to bring attention to the company’s chemical dumping.

In 2007, they targeted ExxonMobil’s oil sands operations in Alberta.

At the 2009 Copenhagen Climate Conference, they targeted the Canadian government to bring attention to Canada’s dismal environmental targets.

Their 2009 movie documentary, The Yes Men Fix the World, contained more “truth telling where normally there would be lies.”

Activity
Social reach
Google trends for "The Yes Men"
Available to Insiders only
Get Insider Access to these insights & more...

You can contact The Yes Men using details from this service. (Or read our advice on how to contact celebrities)

The Yes Men, an activist group that brings attention to people and organizations through parody and impersonation, created fake Canadian government websites last month, misleading readers into thinking that Canada would be making positive changes to its dismal environmental policy at the Copenhagen climate change negotiations. More →

We don't have any videos related to The Yes Men.