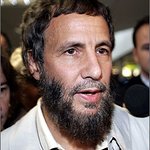 Yusuf Islam, the acclaimed British-born musician and humanitarian formerly known as Cat Stevens, has issued a statement to People for the Ethical Treatment of Animals (PETA) Asia in support of Mali the elephant’s transfer from the Manila Zoo to a sanctuary.

Mali is kept in solitary confinement – which experts say is extremely cruel to elephants, who are highly social – and is in constant pain from her foot ailments, as seen in this new video.

“It was saddening to learn about the poor fate of Mali the Elephant”, writes Yusuf in a communiqué from Dubai. “I hope the Zoo in Manila will do the right thing and let Mali free to enjoy her last years on Earth in the company of other elephants.” He adds, “Keeping humans in solitary confinement is a form of torture because we all require contact with our own kind: mankind. This explains why people congregate so easily in communities, cities and towns; social interaction leads to healthy mental and emotional states. The same is obviously true of animals”.

Despite a congressional resolution supporting Mali’s transfer that passed in the first reading as well as the backing of religious leaders, international celebrities and thousands of school students, the Manila Zoo is delaying her transfer. A lush sanctuary in Thailand has agreed to accept her.

In addition, more than a dozen renowned veterinarians and elephant experts –including Dr Jane Goodall, Dr Dame Daphne Sheldrick and Dr Henry Richardson, who has more than 40 years of experience working with elephants – have called for Mali’s transfer. Dr Richardson has stated, “To put it simply: Mali may die from the lack of care she is receiving if left at the zoo”. Experts point out that transferring elephants is safe and routine.