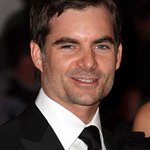 Last week, the Hope For Henry Foundation and Children’s National Medical Center were the beneficiaries of a reception (at a private home) in Georgetown featuring race car driver Jeff Gordon.

Gordon visited the Washington fundraiser on his way to Richmond, where he will drive in this weekend’s NASCAR Sprint Cup Series race.

Jeff Gordon, whose philanthropy focuses on ending childhood cancers in the U.S. and abroad, emceed the evening and engaged Laurie Strongin, Executive Director of Hope for Henry, and Dr. Kurt Newman, CEO of Children’s National Medical Center, in a panel discussion about the latest advancements in treatments and cures.

While Newman lauded Children’s cutting edge research in genomics and personalized treatments to save lives, Strongin explained her group’s success in “…saving the ‘quality of life’ for children and their families,” being treated at Children’s and other area hospitals. In 2008, the Jeff Gordon Children's Foundation began funding Hope for Henry’s program to provide fun and exciting birthday parties to Washington area children spending their birthday in the hospital.