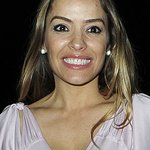 Spanish model Elen Rivas will join dozens of people wearing bull masks to present officials at the Spanish Embassy with a 67,078 signature-strong petition opposing a political initiative in Spain to protect bullfighting as cultural heritage.

Campaigners – members of PETA, the World Society for the Protection of Animals, Humane Society International and the League Against Cruel Sports – and a giant “bull” will gather outside the embassy as part of an internationally coordinated effort. In a show of global unity against the cruelty of bullfighting, similar petitions will be presented to Spanish Embassies around the world.

“I am proud of my Spanish heritage, but the fact that some people are still clinging to the tradition of stabbing bulls to death in bullfighting arenas is something that the vast majority of Spaniards, including me, are ashamed of”, Rivas says. “Glorifying the deliberate slaughter of animals should not be tolerated in a civilised society.”

The proposed legislation, which is moving through the Spanish parliament, seeks to protect and promote bullfighting as cultural heritage, including allowing public funds to be used to prop-up the industry. A recent Ipsos MORI poll of Spanish citizens showed that more than three quarters do not wish their taxes to be used for this purpose, and the majority of Spaniards don’t attend bullfights.