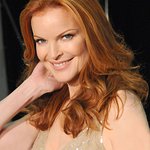 In 2012, on the occasion of the Life Ball’s 20th anniversary, the Red Ribbon Celebration Concert presented by NOVOMATIC successfully premièred at the Burgtheater in Vienna, Austria. By its third edition, the gala concert has established itself and has become the fixed beginning of the charitable Life Ball weekend.

On May 30, a number of world-famous artists will embrace the good cause once again at the Red Ribbon Celebration Concert 2014.

Readings by Hollywood actress Marcia Cross and by grandees of acting such as Andrea Jonasson-Strehler, Elisabeth Orth, Ben Becker and Cornelius Obonya will round off the artistic concept and give food for thought in a witty way between the classical pieces of music. The topics will vary between solidarity, humanity and social tolerance. The soloists of the gala concert will be accompanied by the ORF Vienna Radio Symphony Orchestra conducted by Cornelius Meister.

“I am proud and happy to be part of this event now for the second time and support this wonderful cause. This subject is very close to my heart,” says Anna Netrebko regarding her commitment.

From the beginning, the proceeds of the Red Ribbon Celebration Concert have been donated to the Clinton Health Access Initiative (CHAI), a long-standing partner organization of the Life Ball. Bill Clinton, founder of CHAI and 42nd President of the United States of America, will personally attend the concert and will express his thankfulness towards the audience, who support an important cause by buying tickets – sustainably stemming the mother-to-child transmission of HIV in sub-Saharan Africa.

Worldwide, around 700 children contract HIV per day – 90 per cent of the new infections happen in sub-Saharan Africa and are due to mothers who transmit HIV to their children. Without appropriate prevention measures and medication, the children’s risk of contracting HIV during pregnancy, birth or breastfeeding amounts to up to 45 per cent. With regular medical check-ups as well as prevision and aftercare, this risk can be lowered to less than 5 per cent – like in the Western world.

“Reducing the mother-to-child- transmission of HIV is one of the central strategies on the way to a future without HIV and AIDS. Unfortunately, way too few mothers already know how to protect their newborns from HIV – or they are not even aware of their own HIV status,” Life Ball organizer Gery Keszler explains.

The Red Ribbon Celebration Concert’s goals are supported for the third time by NOVOMATIC as a presenting partner.

“Thanks to the work of CHAI, thousands of children get a chance to start their lives healthily. NOVOMATIC is glad to be able to make a contribution to this project by supporting the respected and prominently cast Red Ribbon Celebration Concert. We thus also engage in something very important for our company: linking the support of art and culture with social values. We consider it a duty to share our success with society,” says NOVOMATIC’s general manager Franz Wohlfahrt.

Ticket sale starts on April 17, 2014, 8 am. Tickets will be available online at www.burgtheater.at or www.culturall.com.