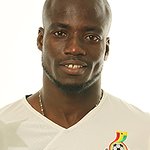 The announcement comes at the conclusion of a successful Ghana National Clean Cookstoves and Fuels Conference, during which more than 100 government, business and NGO representatives gathered to continue progress toward the goal of 100 million households adopting clean cooking solutions by 2020. Stephen Appiah was able to join the Alliance for this important convening in Accra.

In announcing Appiah as an Alliance Ambassador, Executive Director Radha Muthiah said, “Today, in this country that is so passionate about football – and in a World Cup year, no less – I couldn’t be more thrilled to announce that Ghanaian soccer legend Captain Stephen Appiah will become our newest Alliance Ambassador for clean cooking. Stephen represents the first athlete and sports star to take on the pressing issue of household air pollution. I have no doubt that he will be a strong advocate who will spur action in Ghana and around the world, and I look forward to working closely with him in the future.”

Stephen Appiah is best known as the former captain of the Black Stars, the Ghanaian national football team. He led Ghana to its FIFA World Cup debut in 2006, and he also played for the team that won the Under-17 World Cup in 1995. Later in his career, he played for Ghana’s oldest football club, Hearts of Oak, and for well-known European clubs including Juventus and Fenerbahçe. He is respected worldwide for his inspirational leadership both on and off the field.

Today in Ghana, Appiah is involved in a variety of charity work focused on giving back to society and inspiring young football players.

“I am delighted to have the opportunity to fill the role of Ambassador for the Global Alliance for Clean Cookstoves,” said Appiah. “For me, it’s very simple – cooking should never be a hazard to the health and wellbeing of families. If cooking kills, then I don’t want to eat. I hope to be able to use my voice in this role to raise awareness about this important issue and encourage governments, businesses and other organizations to make clean cookstoves a priority.”

The Global Alliance for Clean Cookstoves is a public-private partnership hosted by the UN Foundation to save lives, improve livelihoods, empower women and protect the environment by creating a thriving global market for clean and efficient household cooking solutions. The Alliance’s 100 by ’20 goal calls for 100 million households to adopt clean and efficient cookstoves and fuels by 2020. The Alliance is working with its public, private and non-profit partners to help overcome the market barriers that currently impede the production, deployment, and use of clean cookstoves in developing countries. Find out more here.