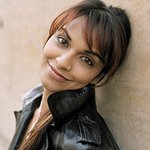 International opera sensation Danielle de Niese is taking on a new role today, becoming an ‘IRC Voice’ to help the International Rescue Committee raise awareness of the needs of refugees and people who have been displaced by conflict, religious persecution or political oppression around the world.

Danielle is the latest talent to become an ‘IRC Voice,’ joining a group of young, prominent artists including Morena Baccarin, Rashida Jones, John Legend and Piper Perabo, who have all committed to do their part to speak up on behalf of some of the world’s most vulnerable.

Danielle is making the announcement in London at an event at Yamaha Music London to celebrate her new role as an IRC Voice.

The IRC was founded in 1933 at the request of Albert Einstein. Since then, the organization has enjoyed the support of many high profile artists, including Marc Chagall, Don Cheadle, George Clooney, Paul McCartney, Paul Newman and Liv Ullmann.

Danielle de Niese said: “I am honored to be able to use my voice to help raise awareness and support for some of the world’s most vulnerable, both the challenges they face and their incredible resilience and determination to build a better future for themselves and for their families.”

David Miliband, President and CEO of IRC said: “Not since the World War II era have so many people been displaced by conflict worldwide. That Danielle de Niese has chosen this moment to raise her voice on behalf of the people we assist at the IRC speak volumes to her character and her sense of mission, passion and commitment to the protection of some of the world’s most vulnerable.”

In April 2014, Danielle invited refugee students from the IRC in New York’s “Leaders-in-Training” program to attend a performance of “The Enchanted Island” at the Metropolitan Opera. She also gave these young leaders—refugees and asylees from places like Nepal and Sierra Leone— a private tour of the Metropolitan Opera’s backstage, an experience they will likely remember for a long time.

In September 2014, Danielle will travel to Tanzania with the IRC to learn more about the organization’s child protection work, focusing on child labor. While on this trip, she will perform at an IRC event for ministers of the Tanzanian government. Before the end of 2014, De Niese also plans to visit resettled refugees in the San Francisco Bay Area and serve as a guest teacher at Oakland International High School.

Described by the New York Times as “Opera’s coolest soprano,” Danielle has been stunning audiences around the world since the age of 8, making her debut at the Met at a mere age of 19 playing the role of Barbarina The Marriage of Figaro. This year has already seen Danielle star in leading roles in La Calisto in Munich, The Rake’s Progress in Turin, and in the Metropolitan’s production of Così fan tutte which was screened in HD in over 1,600 cinemas worldwide.