Scheduled to launch in mid-2015, Living History will be a comprehensive, interactive, online experience that will chronicle the life and accomplishments of the Dalai Lama, one of the world’s best-known and most-respected advocates for peace.

The Global Center for Peace is a three-part initiative designed to support and catalyze the advancement of peace, compassion, and social and economic change worldwide. The first phase, the Living History project, launched an Indiegogo campaign to raise funds needed for development of the online experience. The second phase, the Incubator For GOOD, is a program that will enable social entrepreneurs aligned with the Dalai Lama’s messages of peace and compassion to collaborate, learn critical skills, meet partners and funders, and further develop their organizations. The final phase, a Bay Area-based Center for Peace, will be a physical space designed to educate, inspire and encourage action among the next generation of peacemakers throughout the world.

“The Living History of the Dalai Lama will make the words and actions of this extraordinary man accessible to people across the globe so that new generations of change-makers will be motivated to further improve life on our planet,” said Darlene Markovich, President and Executive Director of the Dalai Lama Foundation. “We’re thrilled to kick off the Living History project as part of our new Center for Peace initiative, all of which will provide very tangible support and impact on our collective journey to advocate peace, ethics and compassion.”

The Living History Project will educate and inspire people around the world with His Holiness’ message of world peace through an interactive, content-rich multimedia web experience that shares major events and the Dalai Lama’s extraordinary life’s work, with contributions from his friends and other universally recognized peace leaders such as rarely seen videos, photos and an interactive map highlighting his prolific world travels. It will also serve as an online social community that will share the many success stories of people, groups and organizations that were inspired by the Dalai Lama. Among his many honors, His Holiness the Dalai Lama was awarded the Nobel Peace Prize in 1989 for his non-violent struggle for the liberation of Tibet.

As His Holiness approaches his 80th birthday, the time is right to create the Living History and celebrate the more than 70 years of the Dalai Lama’s life’s work and accomplishments of this extraordinary man.

The mission of the Dalai Lama Foundation is to support the development of our shared global capacity for ethics and peace, based on a non-dogmatic ethic of compassion. The Foundation was established with the Dalai Lama’s endorsement and advice. As noted by the Dalai Lama, “I am happy to endorse and lend my name to this effort because it promises to try to put into action many of the ideas for peace that I support.” 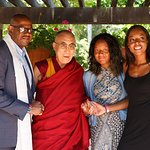