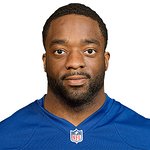 New York Giants running back Andre Williams has joined Get Schooled on the Evander Childs Educational Campus for “College – The Inside Story”, as part of New York City’s College Application Week (Nov. 17-21).

The audience includes seniors from the High School for Computers and Technology (HSCT) and Bronx Lab, two of the 60 high schools participating in the Capital One Bank NYC College Challenge.

Williams, along with several Capital One leaders, including a graduate of Evander Childs, will offer students encouragement and inside tips about the college experience. Williams will also meet with members of the football team, which represents schools from across the Evander Childs campus.

College Application Week is a national effort coordinated by the American Council on Education to increase college application rates.

A 2013 Heisman Trophy Finalist and First-Team All-America selection, Williams graduated from Boston College in three-and-a-half years with a bachelor’s degree in applied psychology and human development prior to being selected by the New York Giants in the fourth-round of the 2014 NFL Draft. In addition to his on-field accomplishments, Williams is also writing a philosophical memoir entitled “A King, a Queen and a Conscience” which is expected to be released in 2015.

“A college education transforms lives – your life, your family’s life, and the lives of those around you in your community,” Williams said in speaking to more than 100 high school seniors about the importance of college and the power of education. “I am here today to tell all of you to take that bet on your future.”

The Capital One Bank NYC College Challenge is a friendly competition that includes 60 high schools serving close to 40,000 students across New York City. It has been designed to encourage high school students to explore college opportunities, apply to college and access financial aid for college. At each school, student ambassadors are spearheading the effort by mobilizing their classmates to participate in the competition, by applying to college and for financial aid. Students with the highest level of engagement and the highest percentage of seniors applying to college will earn a celebrity principal for the day.

“In just the last few weeks, our students have been actively involved in the Challenge, including using the Get Schooled website to complete fun, motivating activities focused on college and various career paths, supporting our goal to create a college-going culture at HSCT and encouraging them to develop college and career plans,” said Jessica Torres, college advisor at HSCT. “The Challenge is a way to incentivize the college and financial aid application process.”

According to the New York City Department of Education, for the Class of 2013, 51 percent of students in the ninth grade cohort enrolled in college the first fall after graduation. At the same time, the Georgetown Center on Education and the Workforce predicts that more than two-thirds of newly created jobs over the next decade will require some postsecondary education, whether a technical certificate or two-year or four-year degree.

“A postsecondary education has become even more important for anyone entering the workforce –obtaining a college degree has a strong correlation with economic opportunity and can increase one’s earning potential by up to $1 million over the course of his or her career,” said Carolyn Berkowitz, Managing Vice President, Community Affairs and President at Capital One Foundation. “We are thrilled to partner with Get Schooled for the Capital One Bank NYC College Challenge to help increase college access. At Capital One, we invest in programs that prepare youth for the jobs of the 21st century, including skills and education that will be critical in the future, and we want every high school student to know that college is a possibility for them.”

The Capital One Bank NYC College Challenge is designed and managed by Get Schooled, a national non-profit organization based in New York. Partners in the Challenge include Capital One Bank, Viacom, the New York City Department of Education, The New School, the New York City College Advising Corps, Cypress Hills Local Development Corporation, and Make the Road New York.

“New York City believes deeply in its students and their potential, and College Application Week is a great opportunity to demonstrate that belief,” said Schools Chancellor Carmen Fariña. “With the vigorous support of community-based organizations and businesses citywide, we are investing in the next step in our students’ education with college application resources and support. I am thrilled to be a part of this and other initiatives that give all our students the academic foundation as well as exposure and access they need to go on to college.”

To learn more about Get Schooled and see the challenge leaderboard, click here.

DJ Khaled is selling his clothes for charity. More →