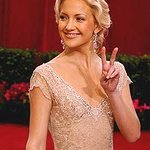 Bringing her signature sense of optimism, generosity and glamour to the table, Kate Hudson will join Michael Kors and Watch Hunger Stop to help build a world with zero hunger by raising awareness and funds for the United Nations World Food Programme (WFP).

Kicking off in October 2015, the Golden Globe-winning and Academy Award-nominated actress’ first philanthropic role for Michael Kors will be helping to launch two limited-edition styles of the Bradshaw watch as part of this year’s Watch Hunger Stop campaign. Every sale of one of these special styles, named the Bradshaw 100, will enable 100 children in need to receive a nutritious meal through WFP’s School Meals program. The watches will be available exclusively in Michael Kors stores worldwide and on michaelkors.com in the U.S.

For every sale of a watch from the Watch Hunger Stop Collection, Michael Kors will donate US $25 to WFP.

“I’m proud to join Michael Kors in this global effort to end hunger,” says Kate Hudson. “As a mother, I can’t think of anything more important than raising a healthy and educated generation of children, and WFP’s School Meals Program is committed to exactly that. This is a cause that I’m eager to be a part of because I believe we can all make a real and significant difference.”

And, the feeling is mutual. “I am so excited to have Kate Hudson join me in the fight to ensure that no child anywhere in the world goes to bed hungry,” says Michael Kors. “Not only does she have a unique star quality but she also brings an incredible amount of generosity and a can-do attitude to a cause that is extremely important to me personally. I’m grateful to work alongside her and WFP to make a real change.”

Since launching in 2013, the Michael Kors Watch Hunger Stop campaign has already helped WFP deliver over 10 million meals to children in need.