Alexander Skarsgard, Jack McBrayer and Andy Bichlbaum Sail to Arctic with Greenpeace and Funny or Die 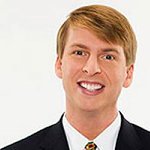 True Blood star Alexander Skarsgard, 30 Rock‘s Jack McBrayer, and Andy Bichlbaum from activist duo The Yes Men are currently sailing on a Greenpeace ship with a team from Funny or Die to make the first comedy series in the world that’s shot on location in the Arctic Ocean.

The unusual collaboration is taking place off the east coast of Greenland aboard the Arctic Sunrise, a 160-foot Greenpeace icebreaker with a rainbow painted on its hull. The project aims to increase public awareness of the costs of global warming, and to build support for Greenpeace’s global “Save the Arctic” campaign.

Over seven million people have joined the cause so far, which hopes to create a wildlife sanctuary in international waters around the North Pole and to bring about an end to oil drilling in the fragile Arctic Ocean.

Greenpeace is releasing daily posts about the expedition on its social media channels, which show Alex, Jack, and Andy discovering the spectacular landscapes and wildlife of the region.

From his cabin onboard the Arctic Sunrise, Jack McBrayer said: “Frankly, I do not like cold weather, so for me to place value on cold weather and ice, that is something. If I am fighting to keep them around, then I think that should carry some weight!”

Alexander Skarsgard added: “This Arctic project is about raising awareness and about getting some important messages out there. But we’re trying to do it in a way where we kind of make fun of ourselves, Jack and I. So we’re trying to do a slightly comedic spin on something that is very serious – a comedic take on a life-and-death question.”

The Yes Men’s Andy Bichlbaum said: “When Greenpeace suggested we come up with a campaign to draw attention to the loss of Arctic ice and what that can mean for the planet, I immediately thought it worth seeing if we could reach some really big audiences. We’re doing a couple of classic stealth actions here too, but I’m thrilled that this bigger collaboration is happening.”