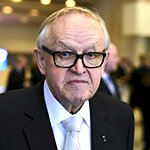 The Elders have launched a series of seven short films presenting their unique perspective on fairness, the human value that underpins the new UN Sustainable Development Goals.

Martti Ahtisaari, Mary Robinson, Hina Jilani, Fernando Henrique Cardoso, Jimmy Carter, Ela Bhatt and Kofi Annan have each selected an object or moment from their lives that symbolises their own view of fairness.

The aim is to start a global re-examination of fairness ahead of the SDG Summit in New York on 25 September and amplify the call for world leaders to show a serious commitment to ending poverty, discrimination and injustice.

The first film was uploaded to The Elders’ Facebook page on 18 September, with a new one following each successive day until the summit begins.

• Film 1 (18 September) is by Martti Ahtisaari, former President of Finland and Nobel Peace Laureate, and features the Finnish baby box given by the state to every new-born child. “It doesn’t matter what your background is, everyone has this so the child gets a decent start… It’s never too expensive to give a chance for a decent beginning for everyone.”

• Film 2 (19 September) is by Mary Robinson, former President of Ireland, and features the Universal Declaration of Human Rights. “Fairness is an extraordinary quality in life and it brings us together in a solidarity that makes everybody better.”

• Film 3 (20 September) is by Hina Jilani, Pakistani lawyer and human rights defender, and features the legal statute to end bonded labour in Pakistan. “For me, fairness is when human dignity is respected. Bonded labour was not only an illegal practice, but a cruel practice that was denying people their basic right to dignity.”

• Film 5 (22 September) is by Jimmy Carter, former US President and Nobel Peace Laureate, and features a poem he wrote inspired by his encounter with racism as a youth. “I grew up in a community in Archery, Georgia, and ours was the only white community there. So all my neighbours, all my playmates, were African-American. And we would treat each other completely equal.”

• Film 6 (23 September) is by Ela Bhatt, Indian labour activist, and features a clay plot made by rural female workers in India. “This pot, it is a public statement that I am concerned with the rural artisan who makes the pot. The money that I spend circulates within that local economy.”

• Film 7 (24 September) is by Kofi Annan, Chair of The Elders, former UN Secretary-General and Nobel Peace Laureate, and concludes the series by urging us all to see the bigger picture. “There’s lots of goodness in the world, don’t go through life focusing on the negative. Be open, and embrace the goodness which also surrounds us.”

Martti Ahtisaari, whose film starts the series, said:
“The SDGs are the latest attempt to further prosperity in a just and equitable way and fairness lies at their heart. This goes beyond fair and equal treatment under the law, freedom of speech and the right to vote. It also means being dealt a fair hand in terms of health, education, access to land and other cultural and economic rights.”

After a three-year hiatus, Habitat for Humanity will welcome hundreds of volunteers, staff, community members and country music superstars Garth Brooks and Trisha Yearwood to don their hard hats once again for the global housing nonprofit’s Jimmy and Rosalynn Carter Work Project. More →